What is Selective Laser Sintering?

What is Selective Laser Sintering? How it works?

Selective Laser Sintering (SLS) is an Additive Manufacturing process that works on the principle of Power Bed Fusion. It was developed and patented by Dr. Carl Deckard and Dr. Joe Beaman at the University of Texas in the 1980s. SLS is a widely used 3D printing method and we will look into the qualities and characteristics that makes it stand out.

SLS works on the power bed fusion process, which means a concentrated energy source is used to selectively fuse layers of powder. This printing process differs from the other widely used 3D printing methods such as FDM, SLA or PolyJet. The energy source can be an infrared laser, electron beam, etc., although a laser is used in the SLS printing method.

As the name suggests, a single layer of powder is sintered using a laser, according to the required model/design, binding the powder together to make a solid structure layer-by-layer. The material or the polymer powder used are generally nylon or polyamide.

After the printing is completed, the printed part is entirely submerged in the unfused powder. The powder bin and the build platform have to cool down before the part can be removed, which can take a few hours. 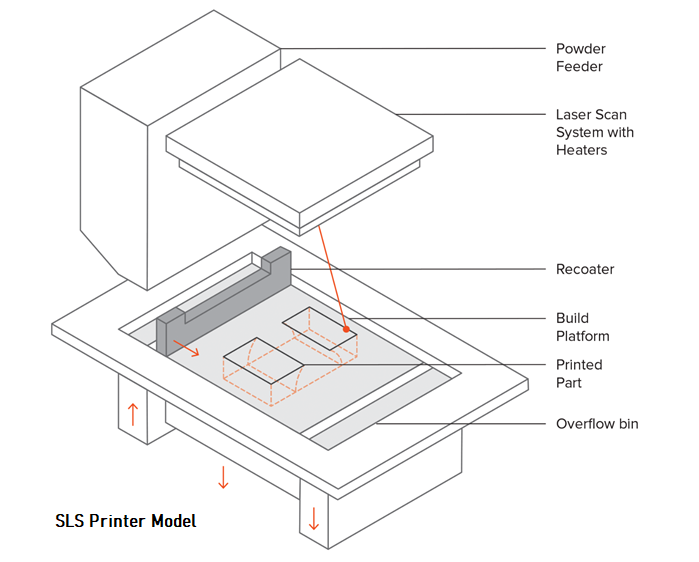 In SLS printing, a small amount of post processing is a must. Since the printed part is totally covered in unfused powder, it has to cleaned. The excess powder can be removed using brushes or compressed air. Once the part is cleaned, it is ready for use or other post process, as per the requirement. Further post processing includes media polishing, spray painting, dyeing etc. The functionality of the parts can also be increased by applying various coatings such as water-resistant coating. 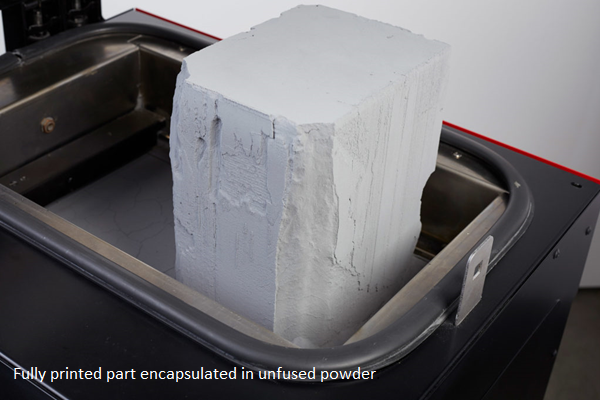 As mentioned before, the layer height of SLS printers are usually 50-200 microns which is the resolution of the printer.

What makes the SLS stand out among the rest is that it does not need support structures. Since the printed part is always encapsulated in unfused powder, it acts as support structures. This allows SLS printers to create geometries and shapes which are impossible to build using other printing methods. This also eliminates the need to print different parts and assemble them later, rather it can print the entire object at one go, which can significantly reduce the time required to make fully functional model or prototype.

SLS printers can also print multiple objects simultaneously as the entire build platform is a canvas for the laser to sinter. This is another way how this method can help save time significantly.

Although, the capabilities of this printing method can be used to its fullest only by smart and proper designing, keeping the capabilities of the printer in mind. Also, the unfused powder in SLS is about 50% reusable, which can add to the cost of printing. Some of the materials used in SLS are Polyamide 11, Polyamide 12, Aluminium-filled nylon, Glass-filled nylon etc.

The bond strength, which translates to the layer adhesion, is also excellent in SLS which provides almost isotropic mechanical strength and properties. SLS parts also possess excellent tensile strength although, it has been noticed that they are more brittle as compared to other printing methods.

Another characteristic of SLS parts is they are vulnerable to shrinking and warping, as heat used in the printing method. As the parts cool down, they tend to shrink approximately 3-3.5%, but machine operators and designers take that in consideration while the designing part.

Multiple parts can be printed simultaneously in SLS printing along with their excellent isotropic mechanical strength. Also, as it doesn’t require support structures, complex design and geometries can produced which are not possible with other 3D printing methods.

One of the biggest drawbacks of SLS printing its inability to print large flat surfaces and small holes due to the shrinking and warping of the parts as they cool down. Another drawback of is the lack of widespread SLS systems availability as they are currently available mainly for industrial purpose.

SLS printing method allows users to print parts which are not possible to print using other printing methods. It is, overall, a very capable and versatile printing method. Although, the lack of widespread availability of SLS printers remain a challenge which remains to be overcome. Until then, FDM printing method will remain to be the preferred choice by the masses.