What is Digital Light Processing?

What is Digital Light Processing? How it works?

Let us find out how DLP works, what are its advantages and disadvantages over other 3D printing methods and more.

DLP printers have three main components: a resin tank which holds the photopolymer, a build head/platform which initially moves down in the tank as parts are printed upside down and a digital light projector. 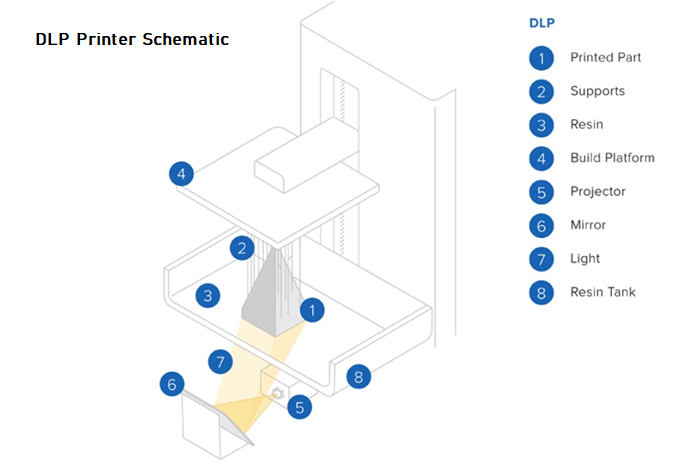 The printing process starts with the build head lowering down in the tank filled with photopolymer. As the build head is submerged in the resin, it almost touches the bottom of the tank which forms a thin layer of photopolymer in between the build head and the tank. Parts are built by curing layer after layer of resin, exactly like in SLA. Now this next bit is what mainly differentiates DLP from SLA.

In SLA, photopolymer layers are cured using a point-to-point technique, which means a single beam of laser is used to cure the entire layer accordingly. DLP uses a specially designed Digital Light Projecting screen which projects the entire image of the layer at once. Thus, an entire layer is cured in one go which reduces printing time significantly as compared to SLA.

As the layer gets cured the build head moves up by one-layer thickness, forming another fresh layer of photopolymer between the cured part and bottom of the tank. This process is repeated continuously till the entire part is printed.

DLP can be considered as a relatively more accurate 3D printing method. DLP printed parts are more accurate and have better surface texture as compared to FDM.

The technique of curing an entire layer at one go makes it significantly faster than SLA, but it comes at a cost. DLP is a digital process and it projects the 2D image using digital projector, which have rectangular pixels which are called voxels when translated into 3-dimensions. This means the accuracy and surface texture is slightly inferior as compared to SLA. 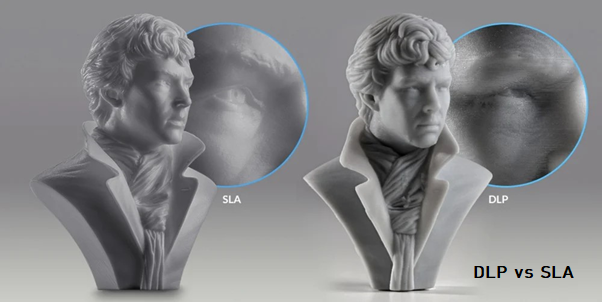 Multiple colours of resins can be mixed together to increase the colour portfolio but DLP is not the best method to print colour parts.

Another aspect of DLP, or vat polymerization in general, is that resins can be messy and have odour. This is something to know before getting a DLP printer and plan accordingly about the surrounding in which it will be used. Use of hand gloves and face mask is also advised.

Similar to SLA, since it doesn’t require heat to cure the resin there are no flexing or warping of parts due to high temperatures which ensures even higher accuracy.

DLP, hands down, provide better accuracy and surface texture than FDM printers. It is worth noting that FDM is the most used 3D printing method in the world.

It is significantly faster in printing as compared to SLA, thanks to the specially designed digital projector. DLP printers are also cheaper than SLA printers and photopolymers cost almost the same for both DLP and SLA. This slightly reduces the cost of printing using DLP printers.

No bending or warping of parts due to high temperature as resin is cured using light instead of heat.

Digital Light Processing has few disadvantages attached to it. Its only significant disadvantage is it has lower accuracy and provides inferior surface texture compared to SLA.

DLP is a promising 3D printing method and according to a market survey it is the sixth most used 3D printing method in the world. Its printing speed and accuracy can provide an excellent balance for people who require 3D printing solution which is more accurate than FDM and faster than SLA. With a price point, which can be termed as relatively low, and availability of compact sized printers allows it to be used for more than just industrial and commercial applications.